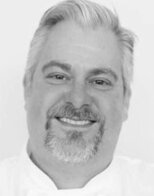 James has been involved with Acting up since his oldest daughter, Leah, performed in Bugsy Malone; after he and his wife, Lori, relocated to the area from their hometown of Cleveland. James' younger daughter, Grace, made her Acting Up debut in Children of Eden. James initially volunteered wherever he was needed, and loved being around the action of the theater. In addition to being a Board Member, he can be found often working on the costume team.

After serving in the United States Navy as a Cook, he earned an AOS in Culinary Arts from The Culinary Institute of America.  Entertainment has always been part of his career. James once owned a Jazz Club, and was previously Executive Chef for the Cleveland Indians and the Cincinnati Reds. James has contributed to two cookbooks and has coordinated and executed food for countless other major events such as the World Series, All-Star Games, concerts, and Super Bowls. James is currently the Executive Chef at Kings Island.

James has his own stage experience as a member of the drama club in high school. He has also appeared on Food Networks Chopped, Chopped Impossible, Cutthroat Kitchen, and several local and National TV spots.