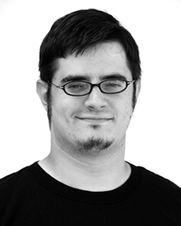 After moving to Mason in 2008, Joey has enjoyed getting into community theater in the Greater Cincinnati area. He can periodically be seen on the stage, having performed in several community theatre productions, including "Jud Fry" in Brieabi Productions' Oklahoma, "Gaston" in Hamilton Rotary's production of Disney's Beauty and the Beast and "Leaf Coneybear" in Greater Hamilton Civic Theatre's 25th Annual Putnam County Spelling Bee.

Joey loves working behind the scenes with Acting Up, having gotten pulled in to the organization by several of his former students. He has done lots backstage, including vocal directing, being a stage hand, assistant directing, pulling flys; as well as directing, starting with Acting Up's production of Seussical, the Musical.

Joey is a native of New Bremen, Ohio, having come to Mason via Bowling Green State University, where he earned a BS in Physical Science Education. He also attended Wright State University, receiving a Master's Degree in Teacher Leadership. He currently works as a chemistry and physics teacher at William Mason High School.

Joey lives in Reading where he likes spending time with his wife Beth and two dogs, enjoying video games, comic books, and other geeky pursuits.