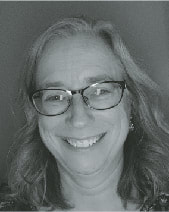 Sue has been involved in music all of her life; singing, playing various instruments, and performing in musicals. After moving to Cincinnati in 1992, Sue sang with May Festival for 5 years, until her daughter was born. After a hiatus of almost 20 years, she started singing again with the Cincinnati Choral Society. Sue started working with Acting Up in 2013 on Bugsy Malone, becoming increasingly involved as her two kids participated in a number of shows and Acting Up FunRaisers. Sue has worked on props, set construction, and costumes, and served as a costume designer for every show since Guys and Dolls in the fall of 2015.
Sue holds a B.A. in French Civilization from Brown University, a Master of Arts in Teaching from Manhattanville College, and a Reading Endorsement from Xavier University. She has taught young children at the Indian Hill Primary School since 1992.